mhmaterialhandling.com
something's on the move

The HP series fast mergers are machines developed specifically for flow-wraps and particularly the part of the line dedicated to the connection between primary and secondary packaging.

The flow-wrap is a very popular type of packaging in many industrial sectors, which finds its most intense applications in the food industry and in particular in chocolate, in bakery and confectionery products. The primary packaging is a three-seal flexible film bag, the horizontal flow-wrapper packaging machines now achieve extremely high productivity at relatively low costs. Good quality ones are easily capable of exceeding 300 products per minute, sometimes reaching considerably higher numbers.

The secondary packaging is usually made up of cardboard trays or displays and the dedicated machines are capable to cover the primary production and often overcome it easily. The market-leaders in manufacturing secondary machines go as high as 800 pieces per minute in a single row. The typical configuration of this type of machine includes a pocket conveyor called “Race Track” which presents a flowpack "layer" to a robot, typically with two or three degrees of freedom.

A high-end secondary machine may be able to handle two or three primary flow-wrappers machines; for other types of packaging where the primary packaging is slower, the number of converging machines can even increase. A high productivity merger dedicated to flow-wrap is no longer a simple accessory of the packaging line, it is rather a machine dedicated to the solution of multiple critical issues.

The first element to take into consideration is the fact that the flow-wrap is a flexible film packaging made with fins, moreover the products that require this type of packaging are often fragile or deformable. For these reasons a merger that works with accumulation is to be excluded in the most absolute way, the products must never touch each other.

The second critical aspect that is often underestimated is that, as speed increases, it is important to get a product pitch as regular as possible as output of the device. A "train" of products could lead to instantaneous speeds for the secondary packaging machine that exceed the productivity limits reachable by the machine itself.

The solution proposed with the HP Merger Conveyors developed by MH foresees a one by one phasing of the products made with a multi-belt system with independent motorizations for each of the entry lanes. The control system of the machine allows to control the pitch between the packages leaving the system and ensures that the merging is performed without contact, thus avoiding the risk of jamming, overlaps or damages. 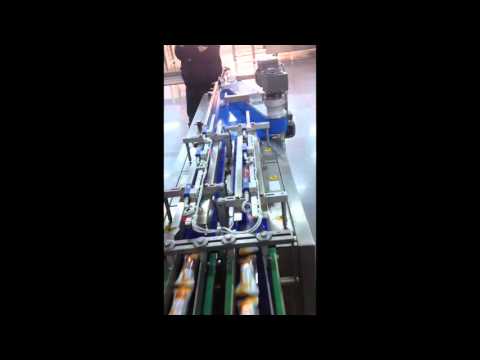 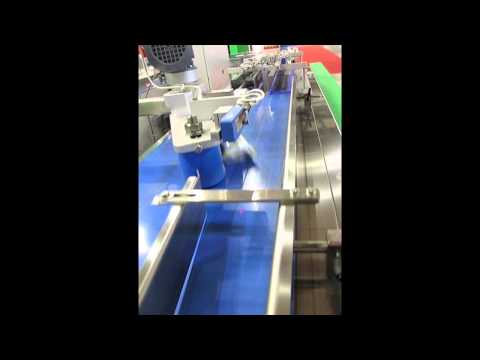